CAPITAL PUNISHMENT: Could you throw the switch...give the injection or turn on the gas...Why?

This post got started by a post in a Facebook group I’m part of - Deadheads Against Racial Injustice - about a death row inmate scheduled to be executed on May 19, 2021. Their post linked to a heart-opening story and video about the relationship that formed between two people who’ve faced or are now facing DEATH – the author via previous cancer and the death row inmate who is scheduled to be executed on May 19. It provides an opportunity to ask our individual and collective souls - why do we still have capital punishment? And, at a personal level – “Could I throw the switch, turn on the gas, deliver the injection – and WHY?”

Here’s the NY Times story and video posted by Deadheads Against Racial Injustice.

If after reading on, you feel compelled to support his and others’ pleas for clemency, come back here and consider signing this petition:

Here’s a link to an Action Network petition asking to stop the execution of Quintin Jones.

QUESTIONS TO HELP US LOOK WITHIN OUR HEARTS:

· What matters more to us – the letter or the spirit of the law?

· How do we see our relationship with G-d – are we separate or connected?

· How do we view our relationships with others – are we separate or connected? To ALL or only SOME?

· Which is more important to us – RETRIBUTION or RESTORATION?

· In sacred texts, do we allow ourselves to sit with both the punitive sections as well as the restorative ones?

· Is our G-d solely masculine or have we also encountered the maternal heart of G-d?

Once awakened to our intimate connection to all others and to planet – our ONENESS - we become enabled to SEE that what’s flowing through the life-giving stream running through the mystical branches of the world’s spiritual traditions – is the TRUTH that capital punishment only serves our lower instincts like revenge and RETRIBUTION. We need, we cry out for the balancing energy of RESTORATION.

SPIRIT OR LETTER OF THE LAW?

This post could be summarized as “Spirit of or Letter of...the Law" and focuses primarily on Judeo-Christian perspectives. Refer to “MORE: SOME LINKS THAT HELPED ME” at the end for some starting points for considering other faith traditions’ views on capital punishment.

BALANCING THE OPPOSITES IN SACRED TEXTS

Like much of life, the Judeo-Christian sacred texts are contain seeming contradictions. Additionally, they reflect our growth in consciousness...or lack thereof. When viewed as a whole, they stem from and reflect the level of consciousness of their times. They are “a text in travail,” as one of my teachers has stated, citing Rene Girard. And, as we walk each day trying to be guided by the perennial wisdom that can be found amidst the regressive texts, WE ARE WRITING NEW CHAPTERS AND VERSES...so, like the rest of creation, the text is EVOLVING...Let’s work together to restore the years that the locusts have eaten...and write new chapters based on the bottom line:

ALLOWING OUR HEARTS TO BE SOFTENED...BROKEN OPEN...

As I watched Mr. Jones plea for clemency, my heart broke and my eyes filled with tears as he asked HOW we can execute a man who no longer exists? He’s been changed...

G-d the Destroyer (as “he’s” called in the Hindu tradition). They seem to forget that there is also a balancing energy that manifests as G-d the Creator, the Maintainer, and the Lover. Both are presented in the sacred texts.

“Jerusalem, Jerusalem, you who kill the prophets and stone those sent to you, how often I have longed to gather your children together, as a hen gathers her chicks under her wings, and you were not willing.” (Matthew 23:37; Luke 13:34)

“Can a woman forget her baby who nurses at her breast? Can she withhold compassion from the child she has borne? Even if mothers were to forget, I could never forget you!” (Isaiah 49:15 NET)

HOW can we ignore these messages of compassion, placing ourselves above the G-d of compassion by choosing to only focus on G-d as vengeful?

Yes, there are consequences for our actions...there is karma to be paid...but taking a life for a life...an eye-for-an-eye...makes the whole world blind...

The above passages I cited and others present a nurturing, RESTORATIVE form of justice rather than a RETRIBUTIVE one. How can the death penalty RESTORE anyone? It can’t restore the life that was taken or the life that is taken in payment. And it kills the souls of all of us – for we are all connected. Please see MLK article below in “MORE:.”

MORE: SOME LINKS THAT HELPED ME...

Facts about the mass incarceration of people of color in the U.S.

Killing in the Name of God (HuffPost)

With G-d on our Side – First Aid Kit

Check out these young folksinger-activists...Gives me hope for our shared future...especially, for theirs...

Part of a BBC “Bitesize” offering on “Crime and Punishment,” the site offers a study guide and text.

An Eye for an Eye Will Make the Whole World Blind

Challenging reflections on the origins and interpretations of this wisdom observation

While not specifically singling out the death penalty, it falls within the scope of his message of non-violence (“ahisma” – Sanskrit) 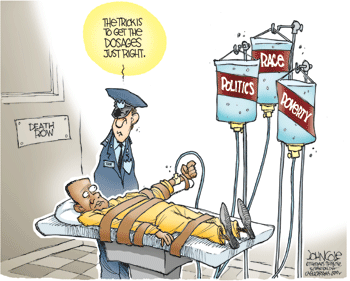 As the Poor People's Campaign describes itself..."We're political but not partisan." The roles could be reversed in this next cartoon...

JESUS ON THE MAINLINE…Call him up...

DEADicated to the one I love...my dancin' thru life partner...

Welcoming the Stranger…for we are all on a Migration